Advocates for Children of New Jersey (ACNJ), a trusted, independent voice putting children’s needs first for more than 30 years; recently posted to their Facebook page, a link to the NYTimes article shown below.

A little background on ACNJ… This non-profit advocacy group, is independent and strictly non-partisan, accepting no government funding for advocacy.  This frees the organization to focus on their sole mission – helping children.  ACNJ educates the public and policymakers, while equipping caregivers with the information they need to be their child’s strongest ally. Their work results in better laws and policies, more effective funding and stronger services for children and families. This means more children are given the chance to grow up safe, healthy and educated.

And now, on to the article… 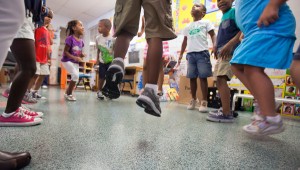 After years of growing concern about obesity among children, federal researchers have found the clearest evidence yet that the epidemic may be turning a corner in young children from low-income families.

The obesity rate among preschool-age children from poor families fell in 19 states and United States territories between 2008 and 2011, federal health officials said Tuesday — the first time a major government report has shown a consistent pattern of decline for low-income children after decades of rising rates.

Children from poor families have had some of the nation’s highest rates of obesity. One in eight preschoolers in the United States is obese. Among low-income children, it is one in seven. The rate is much higher for blacks (one in five) and for Hispanics (one in six).

Several cities have reported modest drops among school-age children, offering hints of a change in course. But gains were concentrated among whites and children from middle- and upper-income families, and were not consistent across the country.

“We’ve seen isolated reports in the past that have had encouraging trends, but this is the first report to show declining rates of obesity in our youngest children,” said Dr. Thomas R. Frieden, director of the Centers for Disease Control and Prevention, which prepared the report. “We are going in the right direction for the first time in a generation.”

The cause of the decline remains a mystery, but researchers offered theories, like an increase in breast-feeding, a drop in calories from sugary drinks, and changes in the food offered in federal nutrition programs for women and children. In interviews, parents suggested that they have become more educated in recent years, and so are more aware of their families’ eating habits and of the health problems that can come with being overweight.

Health officials noted a small decline in the national rate for low-income children for the first time in December, but they did not regard it as important because they lacked a geographic breakdown to show whether the pattern had taken hold in many states.

Enjoy our center?? Write us a review!

Leave a review on one of the following sites and help get the word out about our center!

Iconic One Theme | Powered by Wordpress