In the article below, a new approach to discipline is discussed.  It seemed thought provoking enough to share, as it is a technique anyone could use with their children at home as well.  All too frequently, parents and caregivers get lost in the behavior occurring, and lose sight of helping the child get at what is driving it.  There is a school of thought worthwhile pursuing regarding ‘natural/logical consequences’ with parenting.  It moves along with the same idea noted in this article, that it is much more worth our time, energy and effort to go after what is motivating a behavior, then wasting our time punishing it.  After all, if you can do the time, you’ll do the crime. 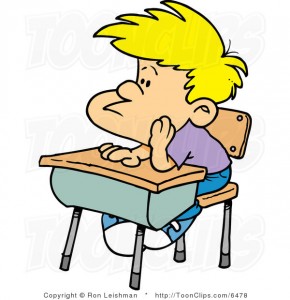 A student blows up at a teacher, drops the F-bomb. The usual approach at Lincoln – and, safe to say, at most high schools in this country – is automatic suspension. Instead, Sporleder sits the kid down and says quietly:

“Wow. Are you OK? This doesn’t sound like you. What’s going on?” He gets even more specific: “You really looked stressed. On a scale of 1-10, where are you with your anger?”

The kid was ready. Ready, man! For an anger blast to his face….”How could you do that?” “What’s wrong with you?”…and for the big boot out of school. But he was NOT ready for kindness. The armor-plated defenses melt like ice under a blowtorch and the words pour out: “My dad’s an alcoholic. He’s promised me things my whole life and never keeps those promises.” The waterfall of words that go deep into his home life, which is no piece of breeze, end with this sentence: “I shouldn’t have blown up at the teacher.”

And then he goes back to the teacher and apologizes. Without prompting from Sporleder.

“The kid still got a consequence,” explains Sporleder – but he wasn’t sent home, a place where there wasn’t anyone who cares much about what he does or doesn’t do. He went to ISS — in-school suspension, a quiet, comforting room where he can talk about anything with the attending teacher, catch up on his homework, or just sit and think about how maybe he could do things differently next time.

Before the words “namby-pamby”, “weenie”, or “not the way they did things in my day” start flowing across your lips, take a look at these numbers:

“It sounds simple,” says Sporleder about the new approach. “Just by asking kids what’s going on with them, they just started talking. It made a believer out of me right away.”……..

Enjoy our center?? Write us a review!

Leave a review on one of the following sites and help get the word out about our center!

Iconic One Theme | Powered by Wordpress